Well, I missed posting last week, but I've been busy preparing to send 40 Easter cards which leaves little time to send or people to send to, and the Easter envelopes are, for the most part, the same. 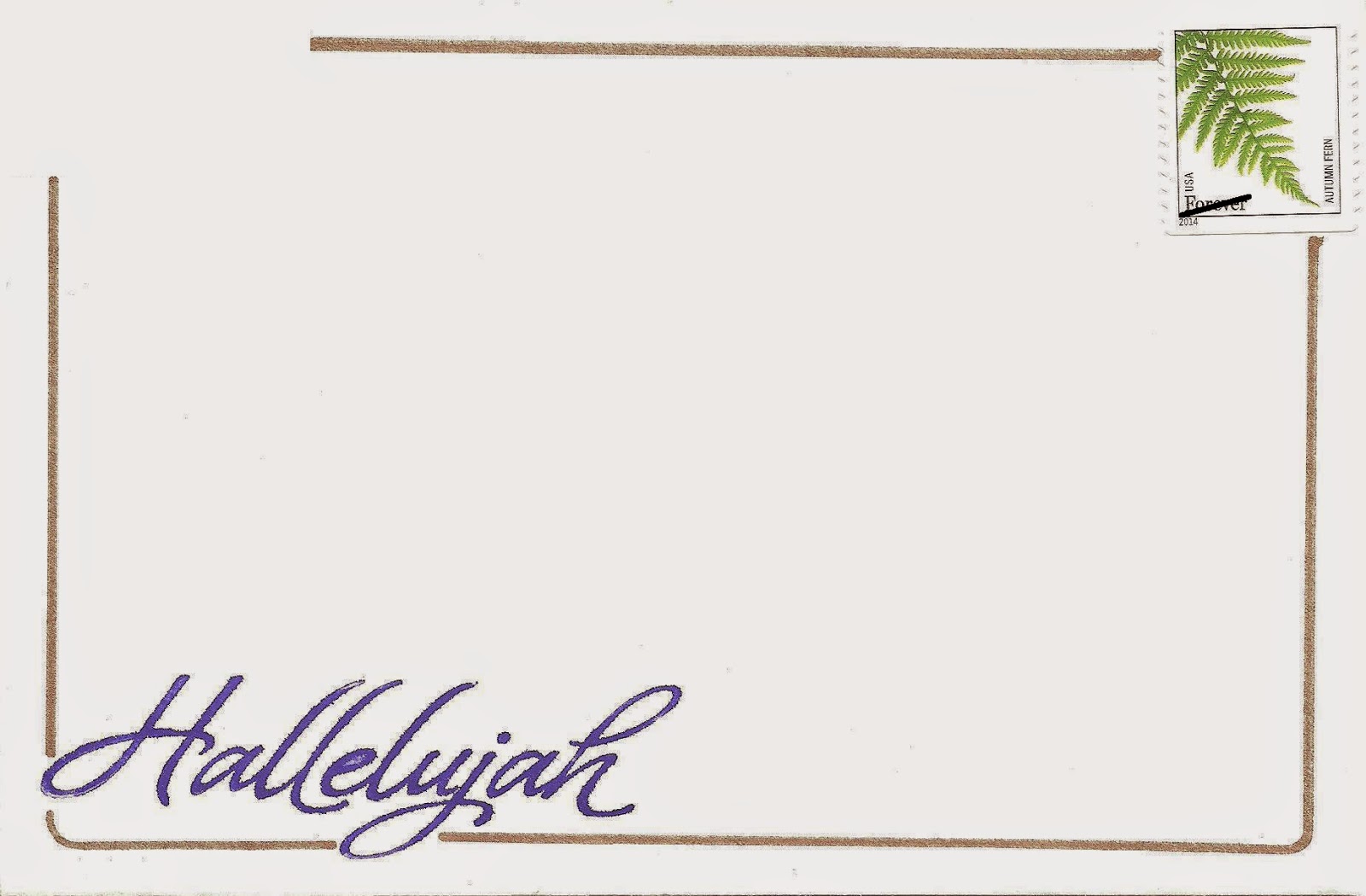 This is our main Easter envelope.  I picked up the "Hallelujah" stamp at Christmas, but my sister had the bright idea it'd work just as well for Easter.  So, purple ink to match the card and a fern stamp to coordinate with the empty tomb scene on the card.  And afterwards I realized it also was a nod to Palm Sunday.  I thought it still looked a little plain, then I got the idea for the boarder from the next envelope, and the card had gold on it, so it was perfect!  I just traced the outside edge of a stencil. 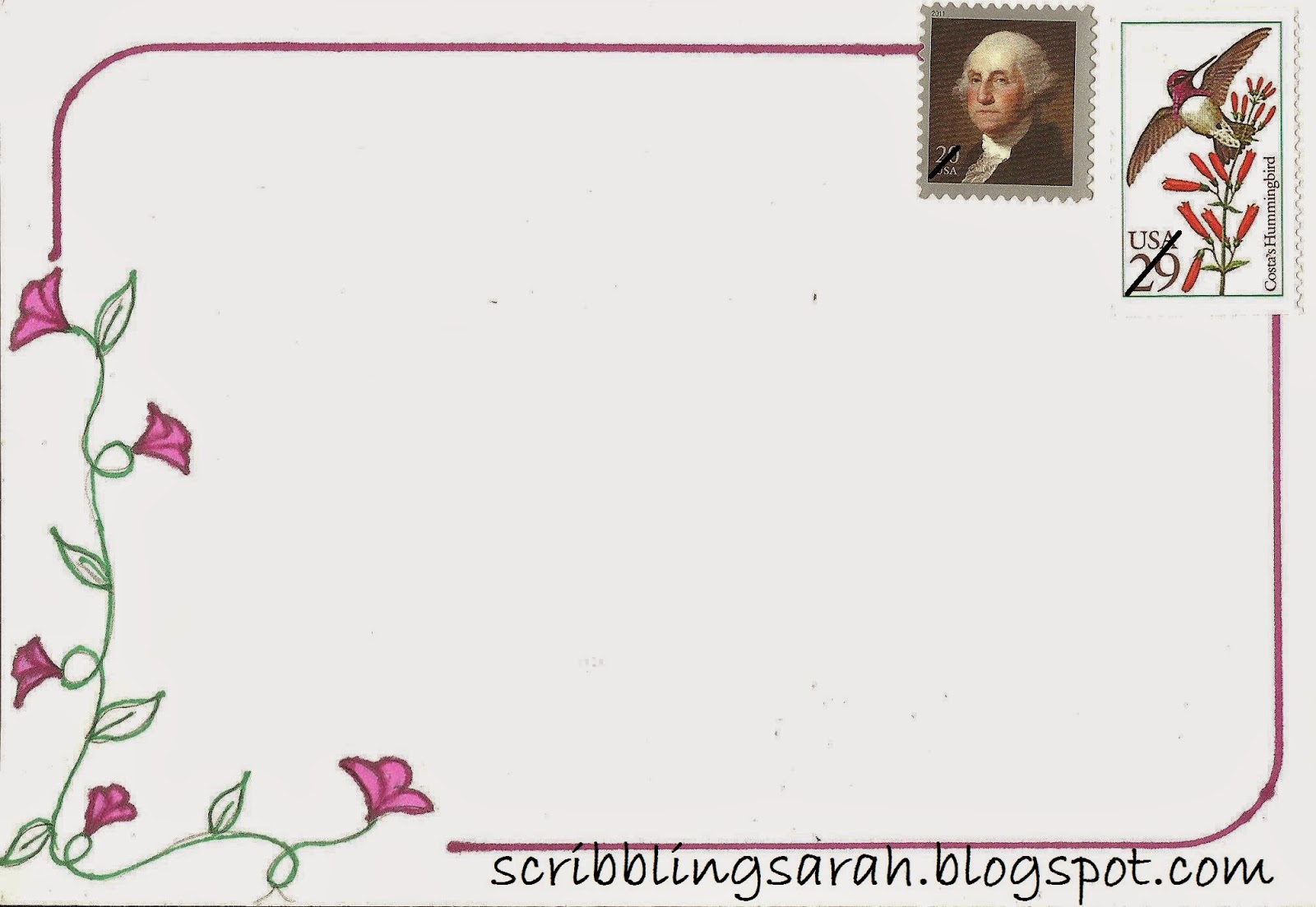 This one was a joint effort between my mom and myself.  It was the mother of a friend who had to go the a nursing home.  I asked the friend if her mom was especially fond of anything and she said hummingbirds.  Which was great as I had a card with one on and this stamp.  My mom helped draw the flowers and had the idea for the boarder. This was with a bunny get well/thinking of you card.  I thought the birds coordinated with the rabbit illustration, and I tied them in with a branch.  The Indiana stamps both matched color, and were great as the card is on it's way Indiana!

Be sure to check back next week for photos (& hopefully report of safe delivery) of a Easter themed 13 oz or less mailing (i.e. mailing something other than a box or envelope that is less than 13 oz, so can be mail 1st class)

I've been doing good with mail lately, I've actually been able to keep up mailing something every day since A Month of Letter.  Not sure why I've been doing so good, but I'm enjoying it!

This is one of the favorite envelopes I've sent in a while.  I was inspired by some recent vintage stamps I got.  The 10 cent one at the top right as the one that gave me the idea with the pen and inkwell to do a desk with envelope and paper.  So, I stamped, addressed, and return addressed the "envelope" and dated the "paper" put the inkwell at the top right, and put a couple "spare" stamps laying on the "desk" to bring the postage up to the current rate. 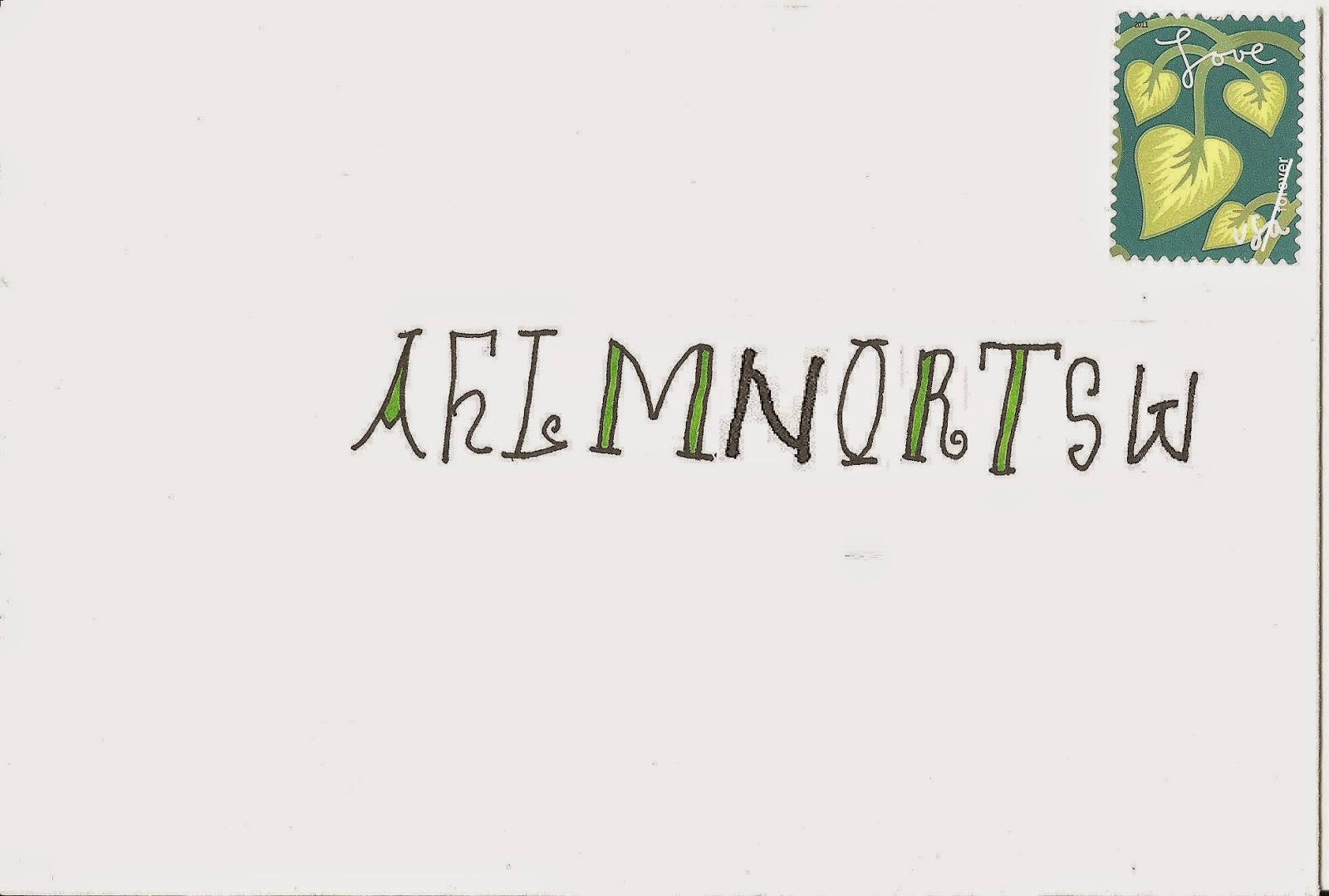 Okay, this obviously wasn't addressed to "AHLMNORTSW", that's just some of the letters I used to address it, cut and pasted into the center as an example, as I didn't want to put the family member's address up here.  I was inspired to do this letter design after seeing an example that was received at envelope 100 and the example shared from Pushing the Envelope.  I think it turned out pretty cute and gave it a definite "St Patrick's Day" feel and the stamp matched well. 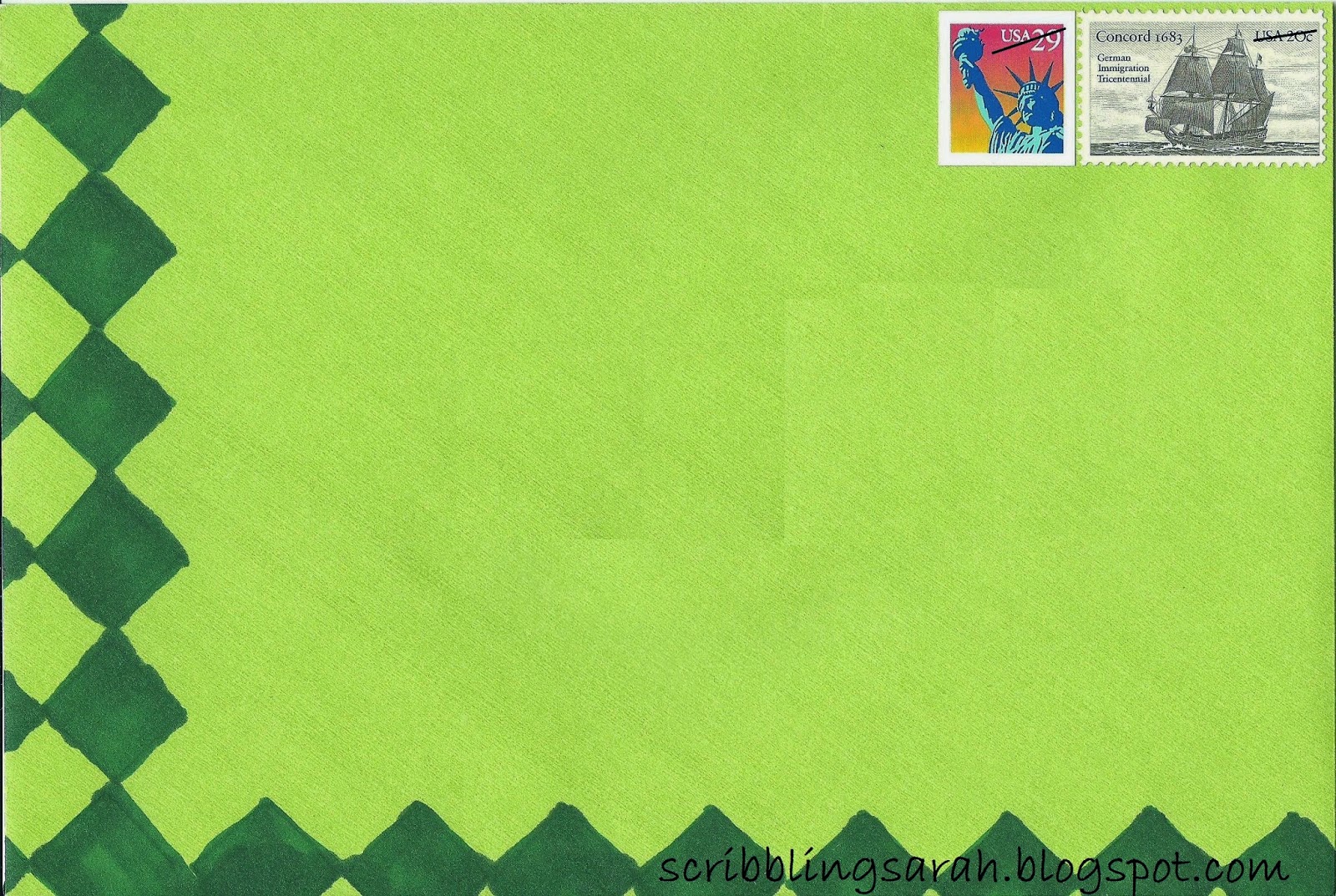 This was St. Patrick envelope.  The stamps were because the family member I sent it to and I are more German American than Irish American, so I thought using the ship stamp marking the "German Immigration Tricentennial" seemed fun, and the Statue of Liberty seemed like a fun way to go with it and fill out the needed postage. 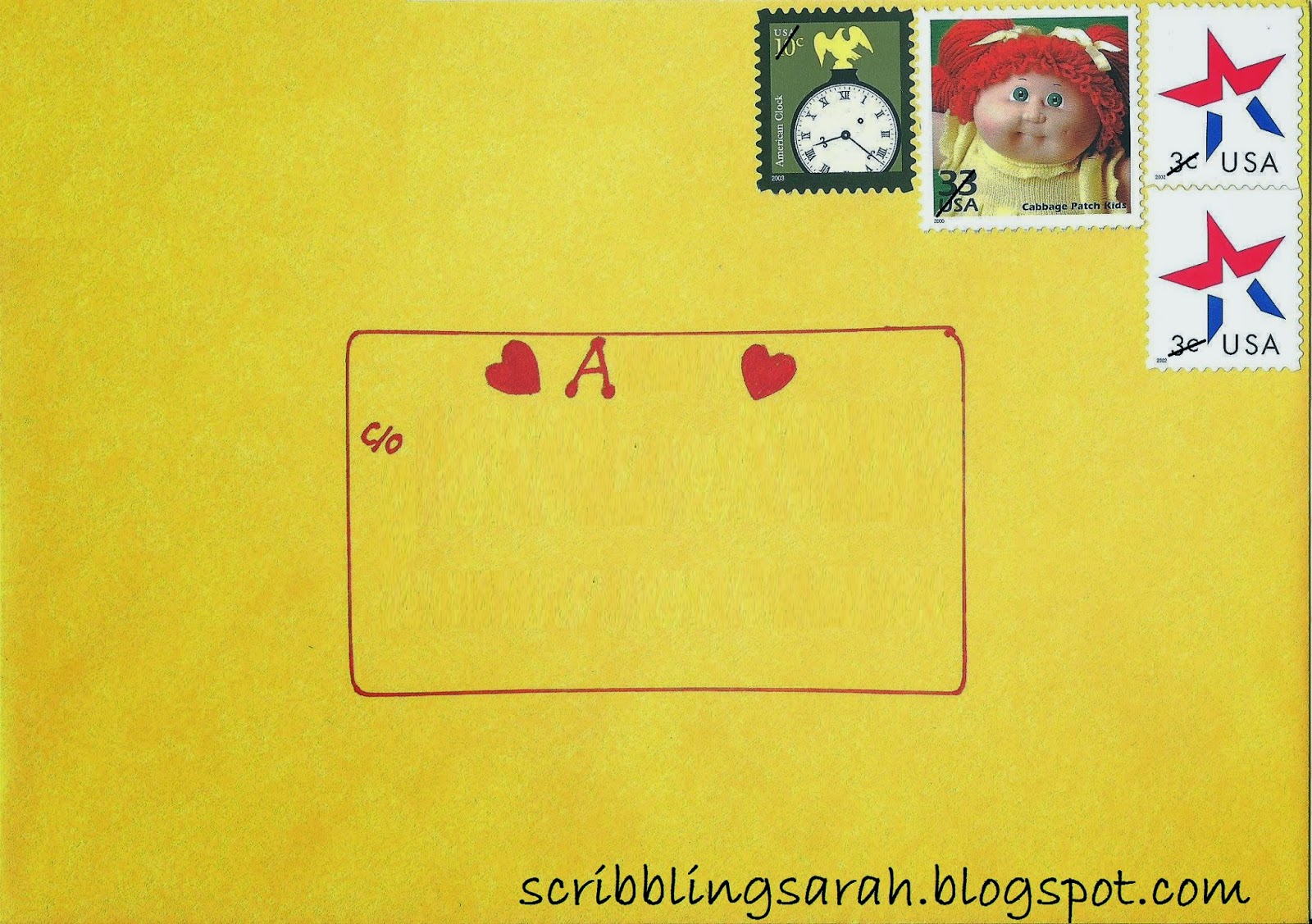 This was a quick card my family sent to the young daughter of some friends of ours who had been in and out of the hospital this week.  I love how having vintage stamps can help you quickly dress up and personalize a piece of mail-I thought the Cabbage Patch doll was just too cute!

The name “Smiles Sent Saturday” denotes my hope these things I mailed made the people who got them smile.
Posted by Sarah at Saturday, March 14, 2015 6 comments:

I was excited when I saw the theme for this week's Sunday Stamps Themes at See it on a Postcard was " riding the rails: trains & trams".  Trains are something I'm quite fond of.  You see, a lot of my family on both sides has worked in train related industries over the years, including one who's job was to walk along the top of train cars entering the famous Horseshoe Curve and set their breaks, so they wouldn't enter at too high of a speed, not a job I would have cared to have! 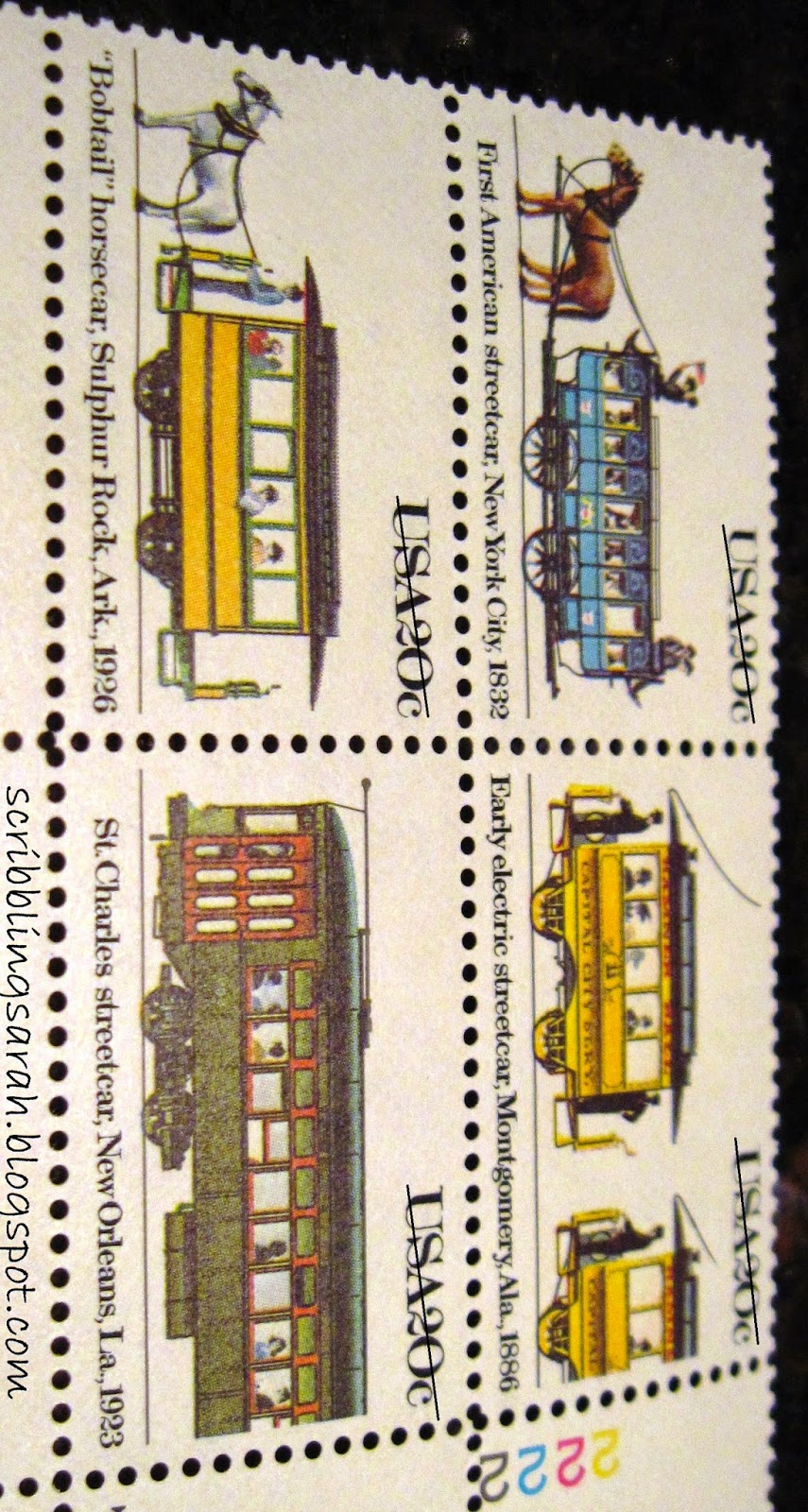 My parents found me these vintage stamps as a gift one year-not quite trains, but things on rails, and I've used them very sparingly for fear of running out.  (you can see my train track envelope here) 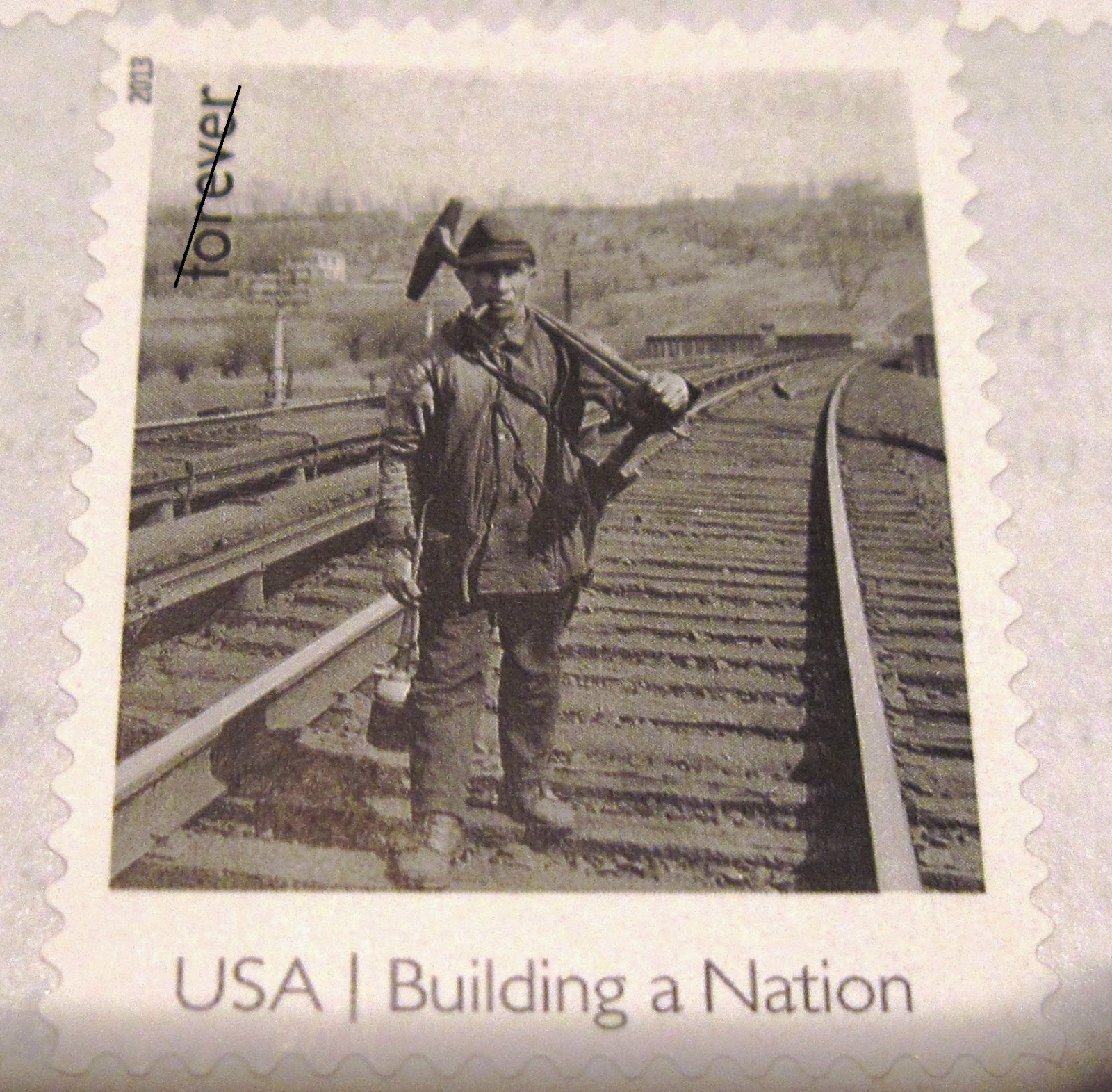 Then the "Building a Nation" stamps came out, and I was excited to see this one of a line worker, which I bought, but haven't brought myself to use yet, due to my limited train stamp supply, but then I hit the jackpot! 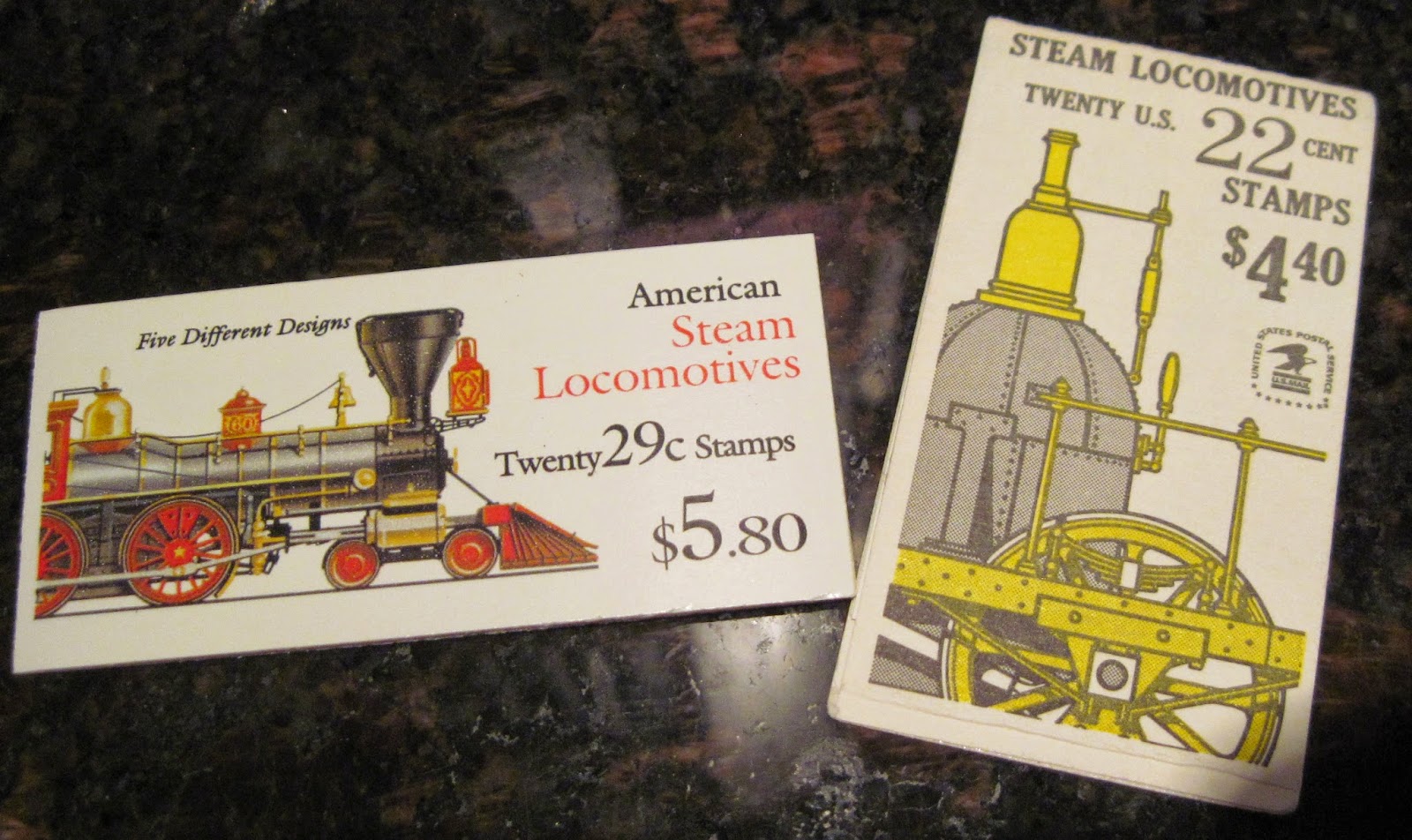 I got these two different Steam Locomotives booklets, aren't they so pretty?!?!

Then I got even more in a lot of random stamps. 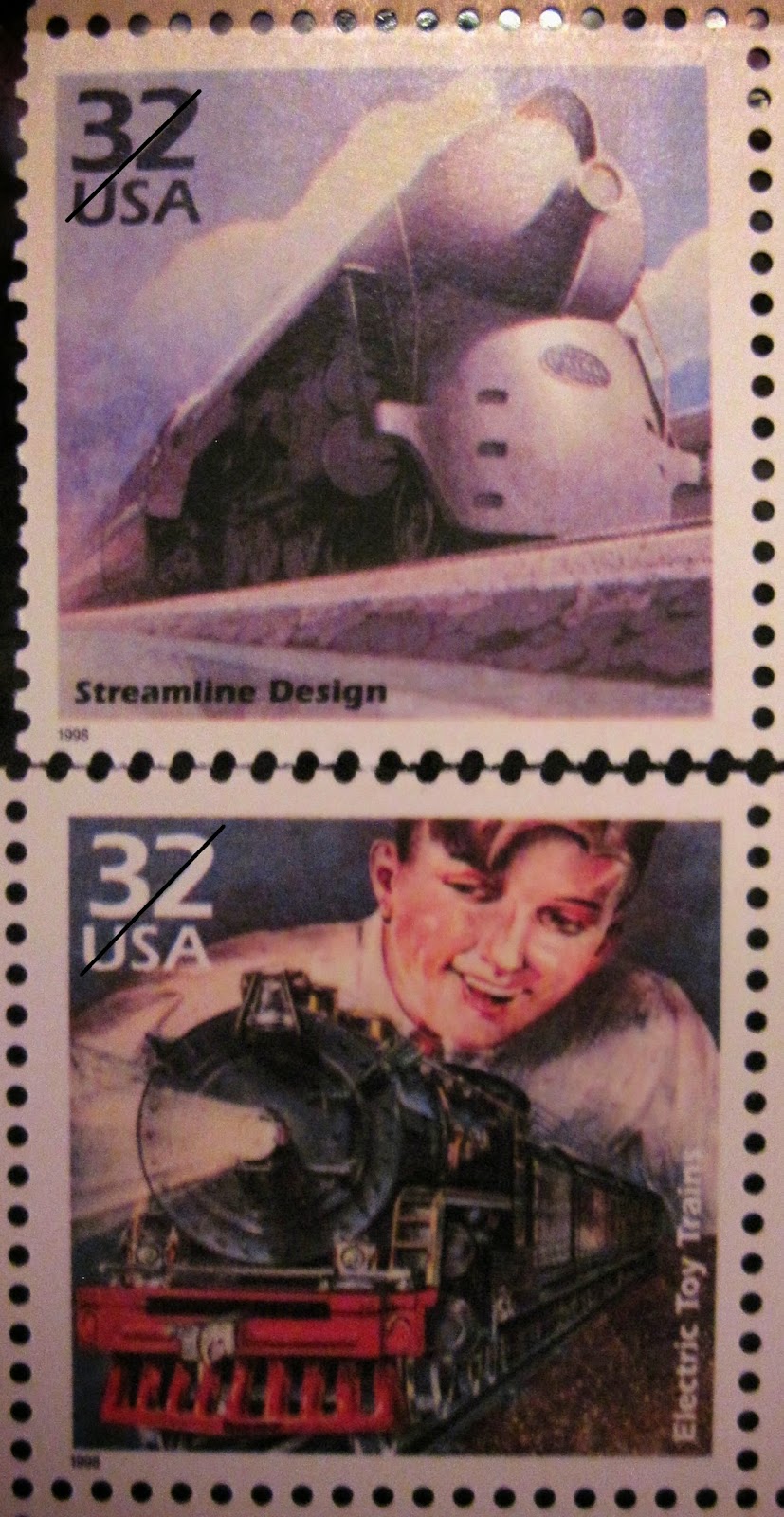 These are from a series of stamps celebrating different decades of the 20th century.  There was a train stamp in both the 20's  and 30's.
EDIT TO ADD: The second one is clearly a toy train, but the first "Streamline Design" is harder to make out the train in the stylized painting, on the back it says "Stressing efficiency and speed, streamlined designs were used for cars, planes, trains, buildings, and even appliances.  The New 20th Century Limited, shown on this poster at the Albany Institute, was an example of the aerodynamic style."  So, I looked up "New 20th Century Limited" and found this clear, public domain image on Wikipedia's page on it, you can see the train much better!  I also learned it was an express passenger train that ran from New York to Chicago. 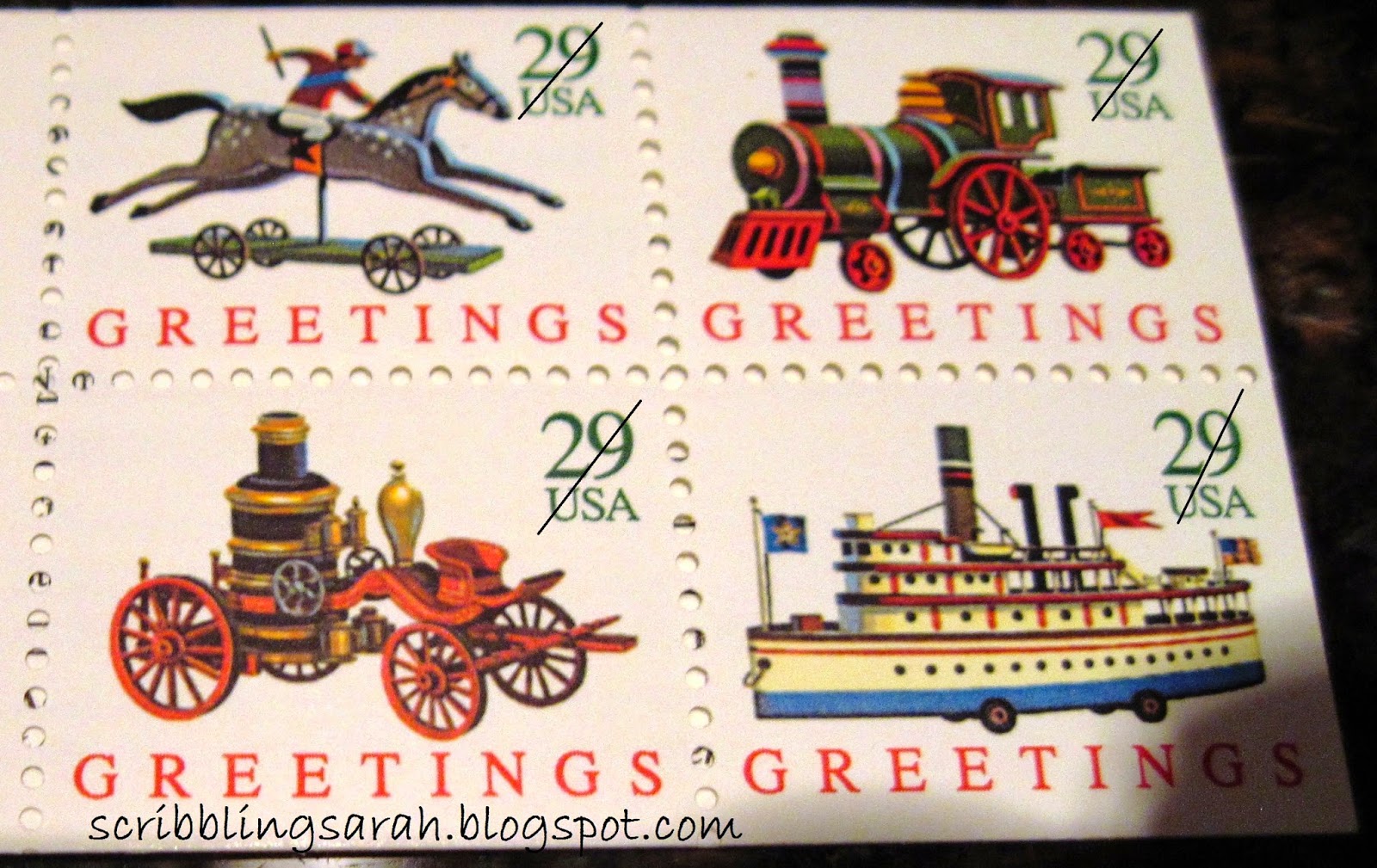 Then I realized these Christmas stamps also has a toy train!

Can't wait to use some more of these stamps...now that I have enough not to hoard them!
Posted by Sarah at Sunday, March 08, 2015 10 comments:

I try to sen mail to my parents aunts (their uncles have all passed) every month or so, when possible using the excuse of a holiday major, minor, or...  So, this month that means notes on green shamrock cards.  The front of the cards is, itself a shamrock shaped cutout.  So, I decided for the envelopes to trace it.  Then I played around some, here's some of the results: 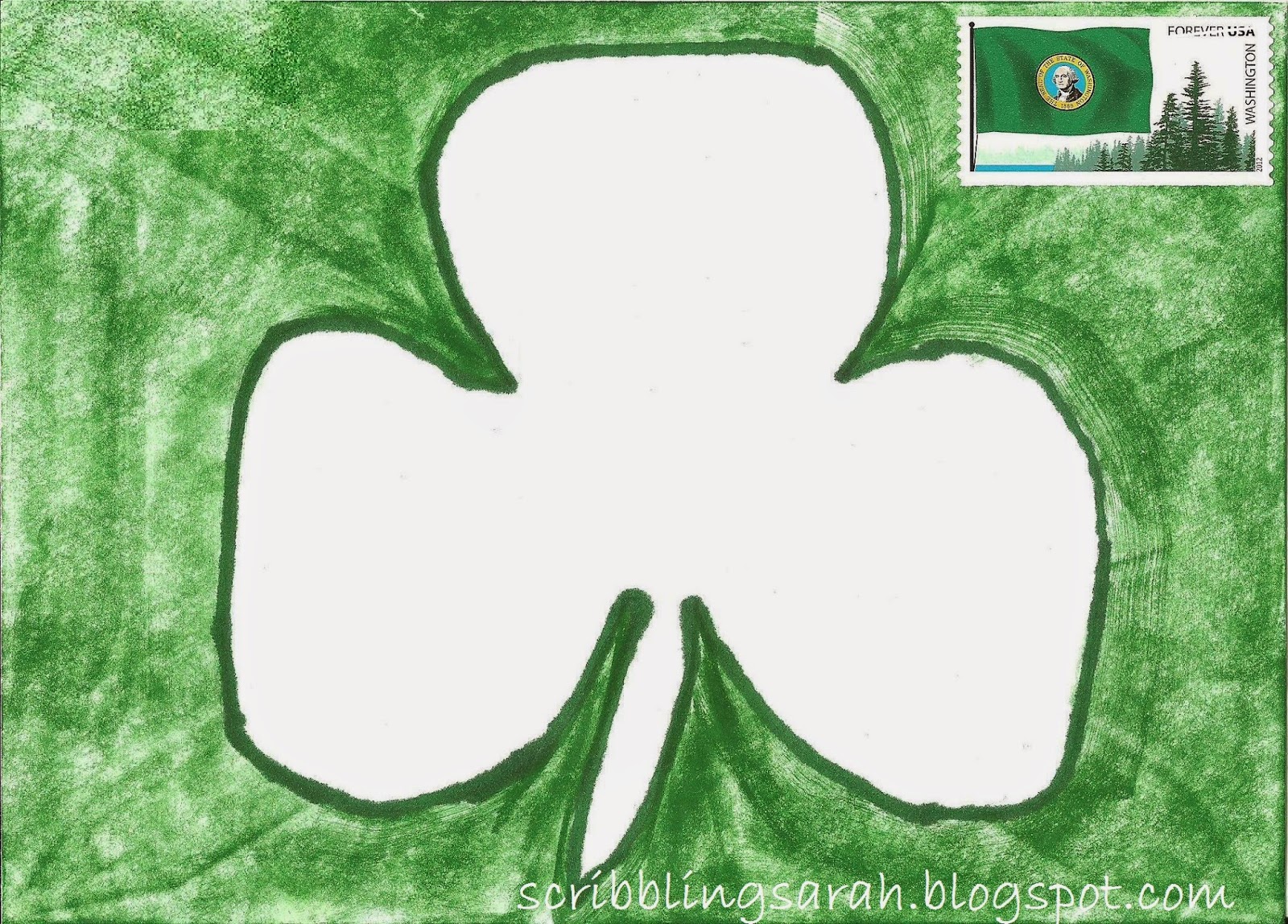 This was the first one, I used the lighter marker as it used less ink, and I was afraid too much might weakened the envelope.  But I didn't really like how it looked, so after a couple, I switched to using only the permanent marker. 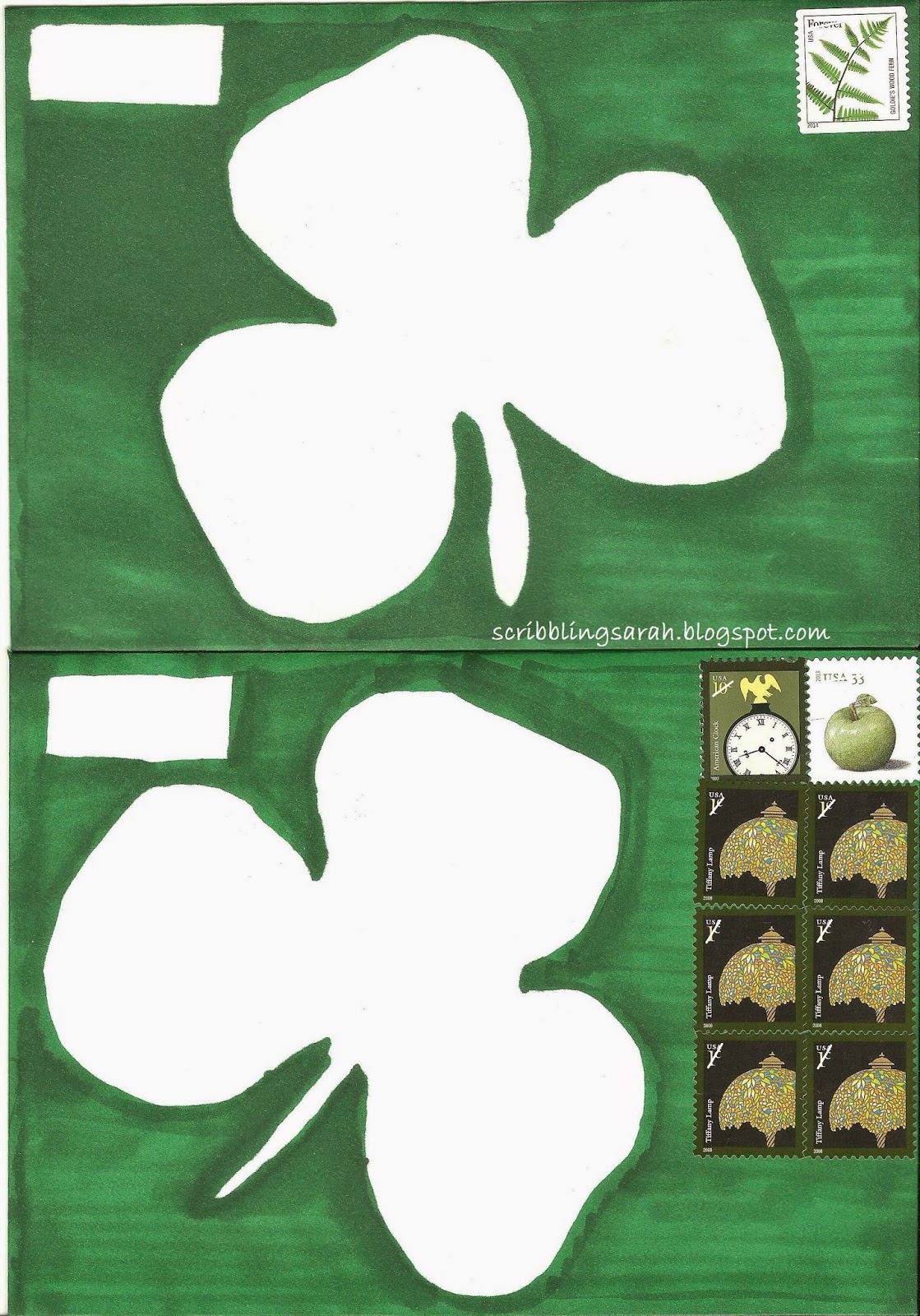 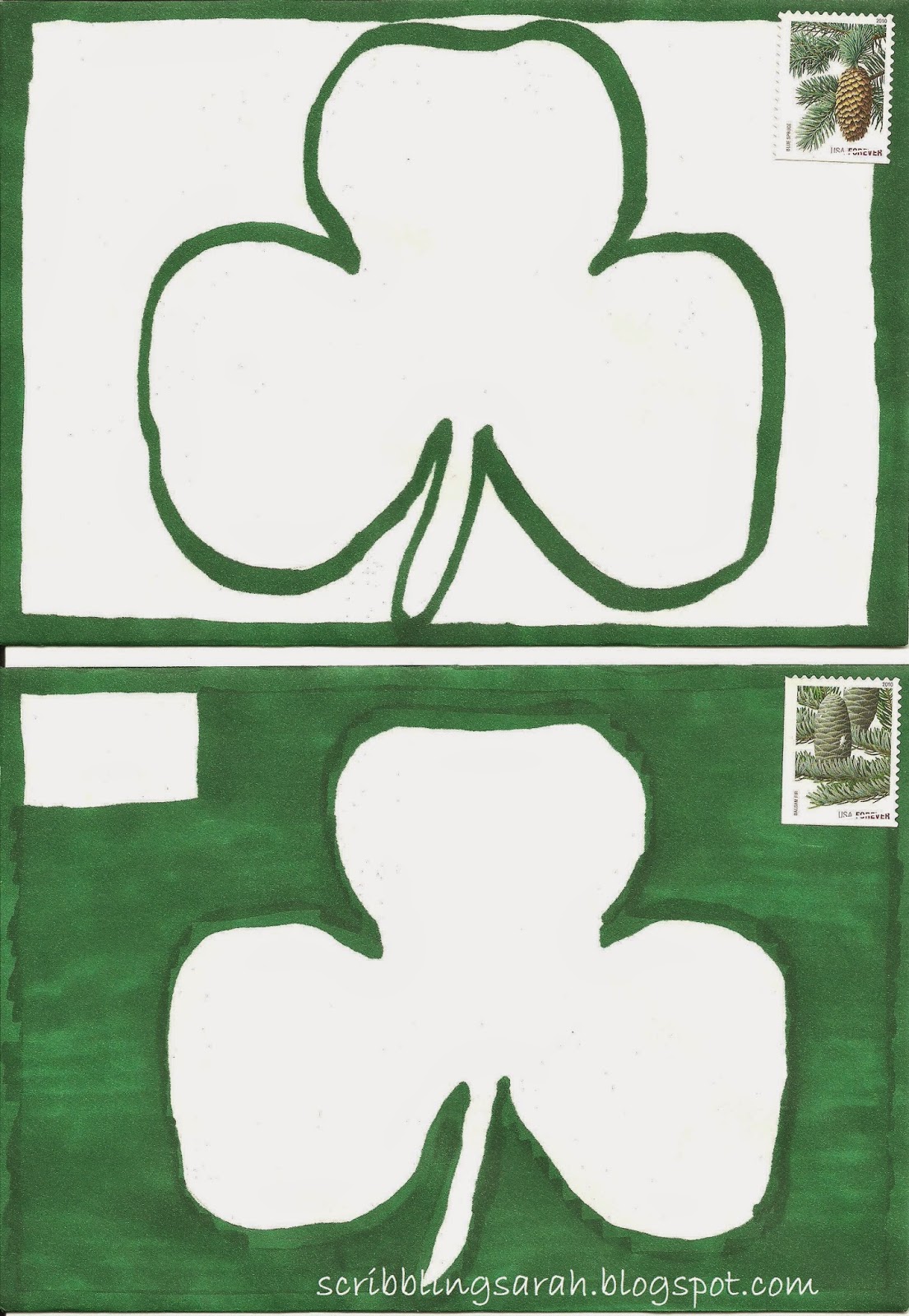 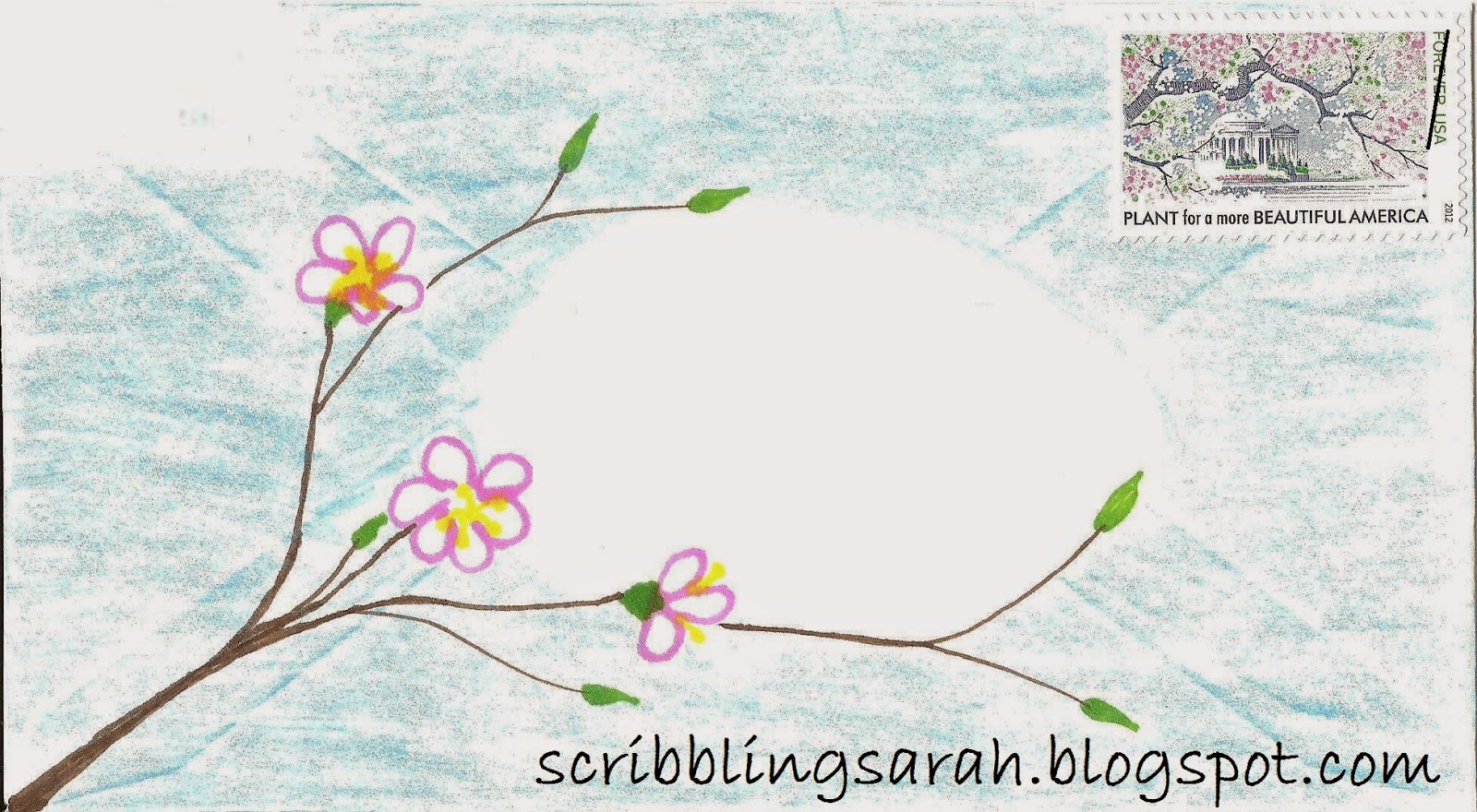 This is another envelope I sent before LetterMo


Have you blogged about something mail related lately?  I'd love to read it, please link up below


The name “Smiles Sent Saturday” denotes my hope these things I mailed made the people who got them smile.
Posted by Sarah at Saturday, March 07, 2015 2 comments: